Though the current house dates back to the mid-18th century, circa 1750, parts of it are older. There has long been a structure on the site and Bishton was mentioned in the Domesday book of 1086.

A handful of important families have lived at the hall through the centuries. Among them are three former High Sheriffs of Staffordshire – John Sneyd, Cecil Stafford Northcote and John Sparrow. The latter was a lawyer and magistrate who purchased Bishton around 1776. 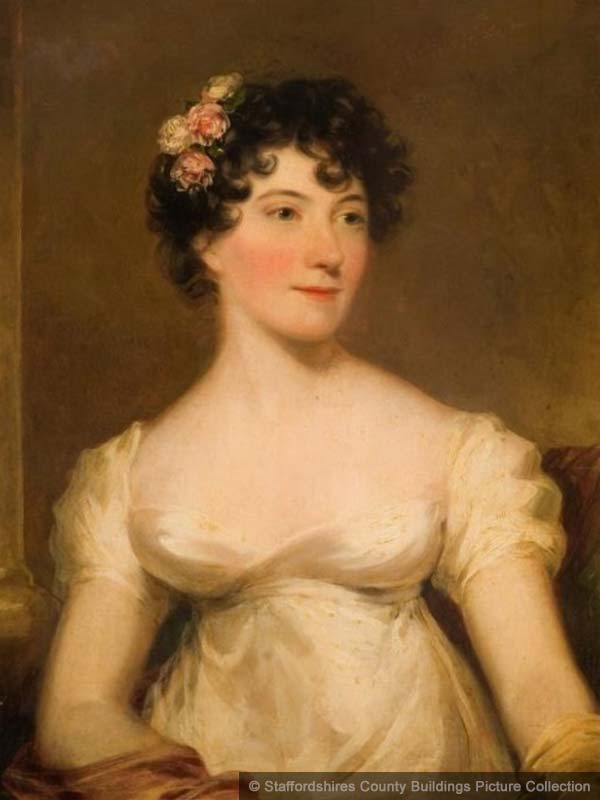 One of our favourite residents was John Sparrow’s daughter, Charlotte. Philanthropy, happiness and education are three words that will always be associated with magnificent Georgian mansion Bishton Hall – and all three are epitomised by Miss Charlotte Sparrow.

Elegant, beautiful and born in 1786, Charlotte called Bishton Hall at Wolseley Bridge, Staffordshire, home for her entire life, living there until she died at the age of 90 in 1876.

Charlotte’s youthful portrait captures her in her prime, porcelain skin surrounded by gentle brown curls. But behind the feminine demeanour was a steely resolve.

It’s thought she never married to ensure Bishton remained in her family at a time when, upon taking wedding vows, a wife’s inheritance immediately passed to her husband.

Instead, Charlotte avoided matrimony and devoted her energies to helping others. Thanks to her kindness, she is still remembered with fondness to this day.

Every year on her birthday, May 17, the pupils of Staffordshire’s Colwich School hold a celebration to honour her. That’s because Charlotte founded their school in 1827.

She believed all children deserved an education so took it upon herself to open a school, paying for everything herself – teachers’ salaries, books, materials and repairs. The total costs for a year came to £180.

At the time few schools for poor children existed. In 1818, John Pounds set up a school and began teaching poor children reading, writing, and arithmetic and in 1820, Samuel Wilderspin opened the first infant school in Spitalfields.

But Miss Sparrow was not far behind them. She wanted to help her community and made practical plans to do so.

In the meantime, Bishton Hall itself, the epitome of English country house splendour, was transformed thanks to Charlotte. Around 1820, shortly after her father’s death, she added the east and west wings of the house.

She must also have witnessed a mysterious addition to property’s gardens. Built in the first half of the 19th century, they are home to a central fluted Doric screen, one of the largest and finest of its kind in the UK – possibly the world.

However, it’s not known who commissioned the magnificent structure or why. The Doric screen is thought to date back to around 1830. This was a time when wealthy land owners and aristocrats routinely went on a Grand Tour of Europe and came back inspired by the wonders of Athens, Rome and Paris.

In 1946 the Stafford-Northcote’s opened St Bede’s school at Bishton Hall. It remained a school until 2018.

Though its school days are over, antiques continue to grace Bishton’s rooms following the purchase of the property by Hansons Auctioneers in 2019.

Charles Hanson, owner of Hansons, is a man passionate about history. As well as being spellbound by the period grandeur of Bishton Hall, he believes the mansion is the perfect place to showcase antiques.

For the first time in its history, the hall is now be open to the public. Historical grandeur and antiques have come together to deliver a new chapter in this splendid period property’s fascinating story – one that everyone can enjoy.